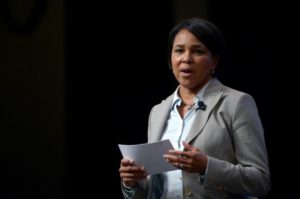 SAN FRANCISCO – Amazon.com has named a black director to its all-white board after facing growing pressure to diversify.

Rosalind Brewer, chief operating officer and director of Starbucks, is one of corporate America’s most prominent women and black female executives. She is joining Amazon as the board’s 10th member and its fourth woman, according to a securities filing from the company Monday.

The appointment comes after Amazon resisted pressure from shareholders, employees and the Congressional Black Caucus to adopt a shareholder proposal to increase the diversity of its board. In May, Amazon agreed to the proposal which calls for Amazon to consider women and minorities for board openings, similar to the National Football League’s Rooney Rule, which has increased the diversity of coaching staff by mandating that teams interview at least one minority candidate.

Amazon has said it has a “longstanding commitment” to diversity with four women now sitting on its board. The retail giant was already actively recruiting Brewer when it amended its corporate governance guidelines last year. Amazon previously had one black board member: Myrtle Potter, former president and COO of Genentech, who was appointed in 2004 and stepped down in 2009.

Amazon is the latest major technology company to add an African-American board member. Former American Express CEO Kenneth Chenault, one of the nation’s highest-profile black executives, joined the boards of Facebook and Airbnb a year ago.

Pressure is intensifying on companies to increase the diversity of their boards. More diverse corporate boards get better long-term results and are better able to spot new opportunities as well as threats, according to research from BlackRock, the world’s biggest asset manager, and others in the investing world pushing for diverse representation.

There are no national requirements to have more women or people of color on boards. California last year passed a law that will require at least one woman on corporate boards with headquarters in the state by 2019 and three on most of those boards by 2021.

Like other major technology companies, Amazon’s is mostly white, Asian and male, particularly at the upper echelons of the company where women and people from underrepresented groups are scarce. Late last year, Amazon hired two Capitol Hill staffers – Troy Clair, former chief of staff to Rep. G.K. Butterfield, D-N.C., former chairman of the Congressional Black Caucus, and LaDavia Drane, former chief of staff to Yvette Clark, D-N.Y., a member of the Congressional Black Caucus – to work on diversity issues.

Brewer’s appointment is one of the most significant steps yet to address the gender and racial gap at Amazon. Brewer, the former CEO of Walmart’s Sam’s Club division, replaces John Seely Brown, the former chief scientist at Xerox Corp., who did not stand for re-election.

“Roz is a perfect example of the extraordinary minority and female talent that exists in corporate America, that is all too often excluded from the boardroom and the C-Suite,” Robin Kelly, co-chair of the House Tech Accountability Caucus and a member of the House Energy and Commerce Committee, said in a statement. “It is my hope that this barrier-breaking appointment serves as an example to other industry leaders regarding the positive economic, business, innovation and inclusion benefits offered by increasing board diversity, especially to companies leading the way in our modern innovation economy.”

Tech companies are looking to recruit workers from a range of backgrounds to brainstorm and build products for a global marketplace. The sharpest deficits in the tech industry are African-American and Hispanic women, who make up 1 percent or fewer of workers while, across other industries, they are represented at much higher rates consistent with their proportion of the overall U.S. population.

Rev. Jesse Jackson, who for years has lobbied tech companies to bring more underrepresented minorities into their boardrooms, praised the addition of Brewer, whom he says has led Starbucks’ outreach to communities of color.

“It’s about time Amazon has desegregated its previously all-white board of directors, especially as it faces growing controversy around the impact of its expansion in Seattle and now in cities like New York,” Jackson said in a statement. “Roz can bring keen insight and hopefully Amazon will emerge as a respected community partner that will treat its employees and ‘host’ communities with the respect they deserve.”

Brewer declined an interview request through an Amazon spokeswoman.

The second-highest-ranking executive at Starbucks after CEO Kevin Johnson, Brewer was already a Starbucks director when the coffee giant tapped her as group president and COO in September 2017. She runs the company’s businesses in the U.S., Canada and Latin America as well as its operations.