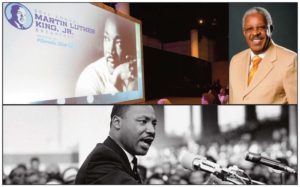 by Nikethi Piperman
The Southern Christian Leadership Conference (SCLC), formed in 1957 and was led by Dr. Martin Luther King, Jr. right up until his death in 1968. The organization’s goal was to advance the cause of civil rights in America, but in a non-violent manner.

It is that original mission that has caused the SCLC, Jacksonville Urban League and NAACP to back away from the City of Jacksonville’s annual MLK Breakfast scheduled for January. Dr. King once said, “Our lives begin to end the day we become silent about things that matter.”

It is a quote that Reverend Levi Wilcox, the head of the Jacksonville SCLC knows well. When asked why the organization is backing away from the City’s breakfast, Wilcox points out the inequalities that minorities are still facing in Jacksonville and how the Mayor has refused to address them.

He added, “The mayor says we have One Jax in this community but in the Black community we are still suffering economically.”

In a letter signed by the presidents of the three historic civil rights organizations, they further explain their decision to back away from the City’s breakfast. The letter states, “As we reflect on the purpose of the Dr. Martin Luther King, Jr. Annual Breakfast we are reminded of the change Dr. King’s legacy requires of us… we must continue – to step up and be the drum majors to serve as a poignant symbol for equality and equity in our society.”

So in turn, the coalition of civil rights groups plans to hold an MLK breakfast at the same time and date of the City’s annual event. With both events scheduled for the same day and time, many past attendees may find themselves torn over which commemorative breakfast to actually attend.

According to the civil rights groups, “In recent years, as the City of Jacksonville took control of determining all details and planning associated with the celebration, for many, this has been and continues to be a divisive and contentious community relations issue.”
A recent statement released by the Mayor’s Office says, “The mayor greatly values and supports this annual observance, which reflects and celebrates the spirit of his administration – One City. One Jacksonville. In an effort to build on these efforts and promote greater inclusiveness and representation of diverse communities, the mayor commissioned a Host Committee to help plan the event. Both Mr. Rumlin and Pastor Wilcox have been invited to participate.”