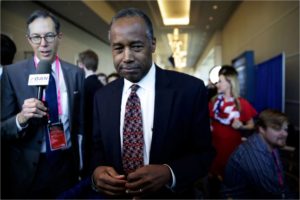 By Stephen A. Crockett Jr.

Ben Carson never wanted to be the Housing and Urban Development director; he wanted to be the president. After losing the Republican nomination to Donald J. Trump, Carson was quoted as saying, “Having me as a federal bureaucrat would be like a fish out of water, quite frankly.”

Strangely, Carson considered Trump a “brother” (not a “brotha” but you get the point) and agreed to take a position in Trump’s cabinet. Since doing so he’s been a damn disaster.

Carson’s time as the head of HUD has been plagued with scandals and bad press. In June 2018, Carson went back to his home town of Detroit to launch his signature mission “EnVision Centers” which would be one-stop shops for all of America’s social security needs. There were to be 17 “centralized hubs” throughout the country that would offer residents the “support services that can help them achieve self-sufficiency.”

A year later not one center has been opened. Carson also made news when he spent some $31,000 on a dining room set for his office. Oh, and he still wants to increase public housing rents.

Ben Carson didn’t want this job but he took it anyway, and since taking this job he’s been out to lunch for most of it. According to an NBC News report, Carson doesn’t do shit when he’s in the office, barely meets with his senior staff and then checks out early on Fridays to head to his Florida mansion and lunches with the author of Chicken Soup for the Soul and the founder of MyPillow.

NBC News obtained Carson’s schedule which shows that Carson spends most of his time figuring out how not to be in the office.

A list of appointments for a 31-week period shows that for about half of the Fridays Carson worked a traditional eight or nine-hour day. For five of the Fridays he was off or had no appointments. For five more Fridays he left before 2 p.m. to get to the airport to fly to South Florida, where he owns a house valued at $4.3 million. For the remaining six, he had no scheduled appointments past 3 p.m. In all, he made a dozen weekend trips to South Florida during the 31 weeks.

The calendar also indicates that in 2017, HUD’s senior staff huddled just once a week. Calendars previously posted by three other federal departments — Transportation, Treasury, and Labor — during the Trump administration show daily senior team meetings or multiple meetings a week.

Three different 2017 calendars from Carson’s office were obtained by the government watchdog group American Oversight through a federal lawsuit and provided to NBC News. NBC News recreated his schedule for the period covering April 7, 2017 to Nov. 1, 2017 using listings from the three calendars — one of them Carson’s, the others from two of his assistants.

When peppered about the amount of time Carson spent at his $4.3 million Florida property (not sure if this is where Carson keeps the painting of him as Jesus), Carson threw copious amounts of shade.

“While the role of a Cabinet Secretary is to advise the President and run their agency, the role of NBC seems to be spinning incomplete information and misinforming the public. Looks like we are both doing our jobs,” Carson said in a statement.

Looks like Carson is getting rather bold now that he’s about to step down. Carson is set to leave his position at the end of his term in 2020, which means that Trump will need a new black; maybe they could find someone to run HUD who actually wants the job.