The Florida Rights Restoration Coalition a grassroots, membership organization run by Returning Citizens (formerly convicted persons) who are dedicated to ending the disenfranchisement and discrimination against people with convictions and creating a more comprehensive and humane reentry system that will enhance successful reentry, reduce recidivism, and increase public safety.

Earlier this month FRRC received a five thousand dollar check from the United Mine Works and Concerned citizens and are rallying to pass the November 6th Voters Rights Amendment.

Floridians for Fair Democracy, led by Desmond Meade, of Orlando, successfully gathered more than 799,000 certified signatures in their years-long petition drive, just a week before the deadline to reach the required total of about 766,000. Because of that, the state on Tuesday certified the initiative for the Nov. 6 ballot.

If approved by 60 percent of voters, the amendment would restore voting rights to Floridians with felony convictions after they fully complete their sentences, including parole or probation. Those convicted of murder or sexual offenses would continue to be barred from voting.

“The moment I found out, tears just started streaming down my face,” said Meade, a former addict convicted on drug and firearm charges in 2001. Though he went on to earn a law degree, he could not vote for his wife, Sheena, in her unsuccessful bid for the Florida House in 2016. “As someone directly impacted, I cannot quantify the level of emotion moving through me right now.”  For more visit www.floridarrc.com. Shown is Desmond Meade with Tony Hill. 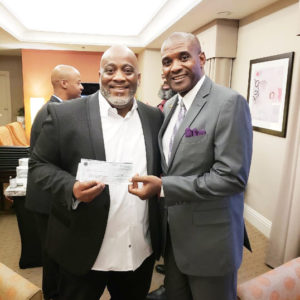