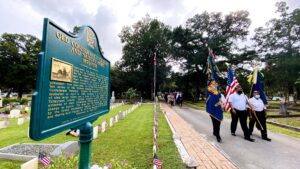 The Clara White Mission collaborated with other agencies to celebrate the 144th Birthday of Dr. Eartha M. M. White, the founder of the Clara White Mission. The Pre-Veterans Day Flag and Wreath Memorial Service of Remembrance were held this past weekend at Old City Cemetery located at 820 Iona St. The memorial also honored veterans who are buried at the cemetery with a tradition of a Flag and Wreath Ceremony that was established more than 100 years ago.

The community was invited to hear testimonials from members of city government and veterans’ affairs advocates.  The 168-year-old cemetery is the oldest in Jacksonville and is the resting place for many veterans who served in the Spanish American War, World War I, World War II, the Korean War and the Vietnam War. An impressive cross section of Jacksonville residents is buried there. Calvin Hart, Kirby-Smith Camp #1209, said, “We believe that the Old City Cemetery has a complex cultural landscape which provides a connection between our past and future. Shown is Calvin hart (Kirby Smith Camp) JuCoby Pittman and Beth heath (We Can Be Heroes Foundation). 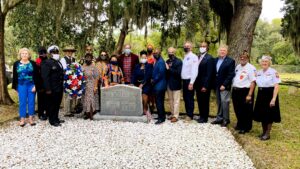